Hit enter to search or ESC to close
HomeJust for FunNewsTipsUncategorized

An Interview with Jasmine 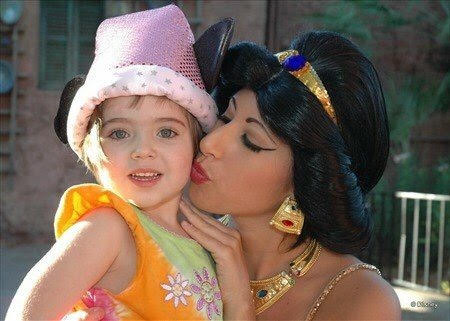 By far, the best part of interacting with the agents at Believe Vacations is learning each others backstories.  Some of our agents are stay-at-home moms, others are full-time employees in other industries and some actually have Disney backgrounds.  And when one of us has actually worked at Disney, the rest of us are sure to have questions and that’s where we are in today’s post. 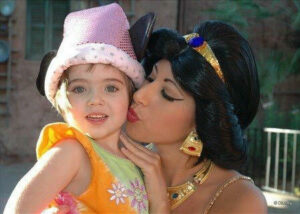 Meet Colette Spirer.  Colette has only been with Believe Vacations for a month but her Disney experience is unmatched.  That’s because Colette worked at Walt Disney World.  And if you were not jealous already, she played numerous characters including one of the most popular (and coveted) princesses, Jasmine. Have you ever wondered what it would be like to be a real-life Disney princess?  Colette has lived that life and she took some time to share some memories as the Princess of Agrabah.

Never interviewed a princess before so I apologize for being nervous.  Obviously you loved Disney growing up but you were not always a princess were you?

I grew up going to Disney every year of my life since I was just three-years-old. We would go for two weeks at a time and STILL cry when we would leave. It was truly our happy place. On top of my love and wonderful memories with Disney, I was also a dancer/performer. I had been serious about pursuing a career in the entertainment industry since I was about 14/15, at the time I was dancing in a pre-professional company. I studied and graduated from one of the top five dance schools, Oklahoma City, University, with a degree in dance performance.

What made you decide to audition for a role?

During my Junior year, I was starting to think about what would be next and I knew I wanted to work for Disney. It sounded so magical to think I could say, “I work for the Walt Disney Company!” During my senior year I flew to Orlando to audition, got the job on the spot, and the rest is history!

And I can not even land a sales job on the spot!  Was Jasmine always the plan or just to land a character role?

I had been told my entire life I looked like Jasmine. When I flew to audition, I knew I would be happy with anything because it is very hard to land a job with Disney, but once you are in it is very easy to move up.

Can you explain the audition process?

You go for a general casting call and they have you learn a short dance combination to see where you could be placed if given a job. If they think you look like one of the princesses, they will pull you aside and request a  “face audition.” You try on the wig and say a few lines. I auditioned as a dancer but got pulled for Jasmine and I actually had to pick one. I knew I would have other opportunities, so I chose Jasmine. We all know how cool it is to say I am a Disney Princess!!

Totally cool! But it must have been a lot of work and practice before going “onstage” as Jasmine, right?

Every character goes through a week training. There were only two other Jasmines with me so you get a lot of one on one time. The Disney Casting staff helps with all of that. They test you at the end to make sure you live up to the characters and Disney’s expectations.

My wife always says “There’s a prize in the end.”  So you have this intense training and now you’re ready.  Describe that first moment for you when you knew you were making a little girls’ dream come true.

It started from day one. I would have little girls make pictures for me, bring presents from their home town for me to remember them by, sing me songs, the list goes on. It was, of course, always extra special when you had a little girl dressed in a Jasmine costume.

I assume you got to work the Morocco Pavillion at Epcot.  Any good stories there?

This adorable little girl dressed as Jasmine, and truly looked like her too, was at the very end of line looking so anxious and excited. Every character has an attendant stand with them and it’s usually the same one as we are all “bid” in a spot when cast full-time. The attendants close the line as your time out is coming to an end. You never want to rush a guest and we could see I was not going to be able to get to the little girl before break. The attendant told the family the bad news and the little girl looked so sad and crushed. I immediately told them not to go anywhere! I forfeited my break and spent almost twenty minutes talking with the little girl about toys, Agrabah and playing with each other’s hair. Her mother told me she could never repay me for this magical moment.

I’ll fight through the man tears because we need more of these positive stories.  What about Akershus?  My family loves that place and that’s usually where we met Jasmine.

I was bid at Akershus breakfast first and then would go to Morocco for the rest of the day. I would see so many faces in a day, but luckily for me my memory is very good. I recognized a family in line from earlier at the restaurant. She was dressed as Jasmine and before she could even come up to me in line I shouted her name and said how I missed her. Her mother cried right there. We got some amazing pictures together and later I found out some of the pictures taken by photo pass were displayed in the halls of Magical Memories to capture and look for. I was given some of the photos too!

Of course, you have to have a story around your own Magic Carpet attraction right?

Aladdin and Jasmine were allowed to select one family first thing in the morning to take on the Magic Carpets ride. To this day, I am so sad I do not have a photo to look back on that memory. Not only did it make the family’s day, but mine as well.

Those stories are amazing and meeting kids and those families must bring such joy.  Did you prefer the actual character meeting spots or the character meals to meet people?

I much prefer the meeting spots because you are not nearly as rushed and can take much more time per family. With Character meals, you want to try to get to as many tables as possible while on the floor until break.

I always wondered if there was another Jasmine waiting in the wings to come on when you were done but it looks like you were always busy.  Did you get along with the other Jasmines or is there some competition to be the best?

I didn’t really see many other Jasmine’s. Because I was bid in the same place four days a week, I was always with the same people. The only time I saw another Jasmine was when we were leaving our first morning restaurant shift and being replaced by the afternoon lunch group. There is definitely some competition though, because they select the ones they “prefer” to use for special events, media etc. as opposed to others.

What was the best (or funniest, saddest, most random) question you were ever asked?

I can’t really pinpoint because most are in awe and quiet when it comes to questions.  I always did most of the talking, but I remember the most uncomfortable one asked by a dad. I am sure you can take a good guess what was said. Let’s just say, we know why Jasmine has a new costume.

Always that one dude who has to ruin it!  You mentioned earlier choosing Jasmine because you thought you would have other opportunities.  Did you get those and land any other roles?

I had to train in fur as well, required by all, but I only was a performer as well as Jasmine. I was fortunate enough to participate in a lot of media events and private parties as well.

Did you prefer to be a street performer or princess?

Jasmine was always favored but I loved both. It was great to get a variety.

How many costumes did you have?

Besides Jasmine, just one other. Because I opened the show, the Let’s Have a Ball costume was fit specifically for me and my measurements.

What was the name of the show and how many times a day did you perform?

I was cast in a show, now no longer, but was called “Let’s Have a Ball.” I was bid four days a week at Epcot, but usually did the show the other days. I picked up a lot of extra shifts too. I also filled in for the parade at Studios, back when they used to have one.

Gracious you were busy! When did you even find time to rehearse?

We would rehearse when the park was closed. We had overnight rehearsal usually at 2am!

Okay, that’s insane dedication.  I know it paid off in making dreams come true but I got to ask, Meet anyone famous?

Kelly Ripa was backstage doing a private tour with her family, but I did not go up and meet them.

Nice, that’s as A-List of a celebrity as it gets.  But I know it means more to you in sharing the magic with your boys and husband more than strangers you meet for brief moments.  Now experiencing Disney with your family, is the magic ruined when you go back?

Definitely not! Now that I have children it is even more special to share and see through their eyes. I will admit, when I was working there, Magic Kingdom and the castle lost a little of that sparkle. I saw it many times a week so I didn’t walk into the park with that “mouth dropped wow” moment. I still get just as excited to go back as I did as a child.

Colette, you’ve been amazing and thank you for sharing these amazing experiences with us.  I guess the only thing left to do is to ask your advice for anyone wanting to be a Disney princess?

As they say in the commercial, “Dream Big, Princess!” Go for it! It will be the most magical time of your life and something only a select few can say they have done. It is a wonderful company to work for with many opportunities. If you put your heart in it, you get so much back in return. And only hang around those who practice and feel the same way! There are always those who complain and see the negative in everything so stay true to you! I wish I could have taken it to the next level and been a casting agent for the company. If only I lived in Florida!

Well, keeping dreaming big princess and until that time, thank you for sharing with us.

Man, that was fun!  I hope you learned a lot about life as a Disney princess.  What questions would you ask someone who had the privilege of a role like that?  Thanks for reading and remember there’s a great, big, beautiful tomorrow!