Best Eat to the Beat Concerts 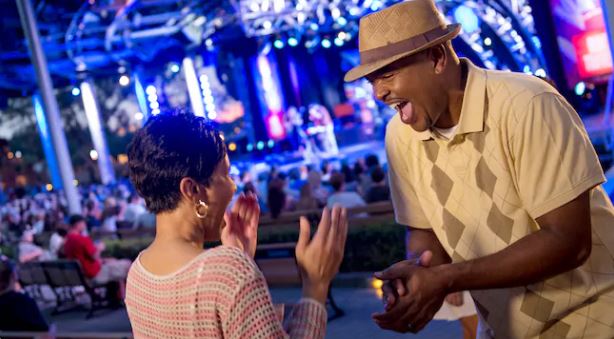 In what is becoming a pretty frequent tradition, I take a week every year to write about the top Garden Rocks Concerts for that particular year.  But don’t forget that Epcot has an Eat to the Beat Concert Series during the International Food and Wine Festival.  So why not offer a similar list based on the schedule and groups who you might be able to see this fall.

Welcome to Believe Vacation’s Top Ten where today, we’ll look at the Top 10 Eat to the Beat Concerts for 2018. For this list, I looked at the entire line-up throughout the festival and have ranked them based on shows I would expect my wife and kids to enjoy and thus, your family as well.  So let’s get rockin and rollin and kick it off with:

It’s not the mall and it’s not the 80s but Tiffany still has herself a popular little act.  30 years later and keeping an incredible set of pipes, this pop singer will get the crowd engaged, singing along and dancing in the aisles.

That Song: I Can Only Imagine

Bringing the spiritual side of things to the festival, this popular Oklahoma group who hit its peak in the early 2000’s will make it’s Epcot debut.  No doubt you and everyone in the audience will be praising with the iconic “I Can Only Imagine“, a song that smashed records and sold 2.5 million copies.

That Song: Caught Up In You

Southern Rock lives as the band returns to its home state of Florida.  Founded by the younger brother of the legendary Van Zant family, this group brings together driving guitars, jammin’ licks and beats and iconic lyrics that will have your rockin’ into the night!

That Song: Cult of Personality

This group may be the best live group of the bunch and it has been proven by their appearances on Arsenio, SNL and even Wrestlemania.  Led by the incredible Vernon Reid on guitar, you’ll be amazed at the sounds that come out of this group from New York.  And when the first few notes of Cult of Personality hit, the crowd is sure to be whipped into a frenzy.

This group is sure to win the “Most times I mentioned ‘I never knew they sang this'” Award.  Sugar Ray was as popular in the late 90s as any other group going.  And to show they were not a one-hit wonder with Fly, their follow-up album was titled 14:59 to show their 15 minutes of fame were not up yet.  Awesome!

Performing at Epcot for many years now, fans of this group know there was no bigger hit for the band, maybe even the entire 80s, than THAT SONG. First they were the hippies of Jefferson Airplane, then the psychedelic spin off of Jefferson Starship and now have settled on the pop rock of STARSHIP. Regardless of names of the band or era, the entire family will remember classic songs throughout the entire show.

That Song: Who Let the Dogs Out?

If for that song alone, everyone with kids needs to try to get over to this show to sing along.  Just an incredibly fun song that will conclude a highly energetic showcase of singing, melodies and awesome dance moves.

That Song: All Star

We have reached the point where Millennials can now call themselves old!  It seems like just the other day Smash Mouth was touring with their new hit All-Star.  Nope, that would be 20 years ago.  The group still sounds great, kids will recognize the songs from Shrek and younger adults will feel like they’ve traveled back in time….only a few years ago really.

That Song: End of the Road

A part of me feels I owe it to these gentlemen and show up just to thank them for many amazing junior high dances.  I always joke that if you were a DJ in the mid-90s and you had a Jr. High dance gig, you had a night off because all you had to do was put in their album II and turn out the lights.  Just amazing songs with amazing harmonies that still sounds as good as the CD did 25 years earlier.

Did I miss anyone? Are you planning on going to one of these shows at Epcot this fall? Leave your comments below and as always, there’s a great, big, beautiful tomorrow!