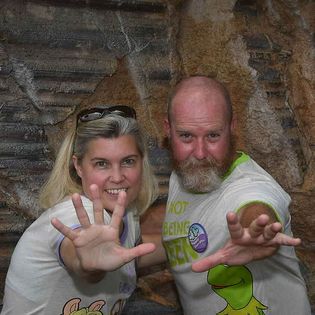 When you are a kid, the answer to the question “Where would you like to go on vacation?” is a simple answer.  “Disney!”  When you are an adult, you may be at the point in your life where you may slightly hesitate before blurting out your intentions to go to Disney.  That’s because you may have children and it may excite them that they will get to go with you.  But what if you are planning a trip without kids?  Is Disney still the obvious answer?  Or do you suggest somewhere else because you don’t want to upset the kids?  That’s where we help you with today’s video and article…

Welcome to Believe Vacations’ Weekly Post where today, we are going to tell you that it is OK to travel to Disney without Kids. Meet one of our long-time agents, Kasie Baird. Kasie has a total of 5 children of various ages and her husband enjoys Disney almost as much as she does.  When it was time to do something for their 10th anniversary, they decided on a “no-kids” Disney trip.  What was that like as a momma to leave the kids at home?  What was it like for the kids to know Mom and Dad are at the “Happiest Place on Earth?”  Is it “cool” to be those people at Disney without kids?  Kasie was kind enough to share her thoughts with us on her magical week!

Why is it important to go to Disney as adults without kids?

You should go anywhere as adults but at Disney, you get to be a kid again.  You get to run around and have fun.  There are great shows, resorts with pools and lounges and of course, the rides.

What is the talk you have with the kids?

It’s easier than I thought.  The older ones are doing their own thing; the younger ones were not sad.  They were just there and will be there soon plus grandparents were coming to stay, which, in our house, is a step just below Disney.  Doesn’t hurt we may have promised some gifts too!

Why not travel to other places in the world?

We both just love Disney.  This was for our 10th anniversary and in these times, overseas is tough to do. Disney is all-inclusive for us so instead of another country, we wanted to try it for the both of us.  Just get there, not have too many plans in mind but something very familiar where we can go and have fun.

How long was your stay at Disney?

We did each park so we did the minimum of four days.  We flew out early, flew home late so it wound up being 4 nights away from the kids.  We tried to spend adult time in Disney Springs and that was our goal on check-in day. I think it was the perfect amount of time.

We stayed at Gran Destino Tower instead of Art of Animation.  As adults, we did not need the big characters and heard great things about the Tower and highly recommend it. For dining, we went to a few restaurants we had on our radar like Chef Art’s Homecoming and Kona Cafe for breakfast.  We never do breakfast with the kids at Disney unless it’s a character meal so this was special.

Did you stick to the same routine?

We go hard with our kids and without our kids.  They nap in the stroller and we never leave the parks.  So we may have went slower than normal and rope-dropped different attractions like PeopleMover.  Not too much different but we did have the goal of doing EVERY attraction at Magic Kingdom in one day.  We got 20 and only missed Swiss Family Robinson Treehouse and Country Bear Jamboree.  We would have accomplished it if some were not down throughout the day.

Did you ride the same attraction?

We stuck to most of them but there were some we could’ve skipped some.  We would’ve been fine to miss Under the Sea and Winnie the Pooh but since we had our goal, we jumped on with almost zero wait time. That includes Barnstormer.  It was fun to be the kid again!

Did you spend the same amount of time in the parks?

We still got up early and stayed almost to the end.  Without children, it’s faster to get ready in the morning and get out of the resort.  With no stroller, you don’t have to park your stroller and backtrack to get the stroller so we had a lot of time.  We were there before opening for every park except departure day.

What did you bring home for the kids?

Princess Croc sandals, a Princess Leia stuffed doll and some Precious Moments dolls from EPCOT.  Of course, they got Gideon’s cookies and they taste much more delicious at home.  Another fun surprise is videos of us on the rides and attractions and showing the kids when we get home.  You wouldn’t think they’d like that but they love it.

Was it more fun without kids?

It was different and it’s fun both ways.  I love seeing it through my kids’ eyes but it is less stressful and more relaxing.  But it was a tremendous amount of fun and we will do it again!