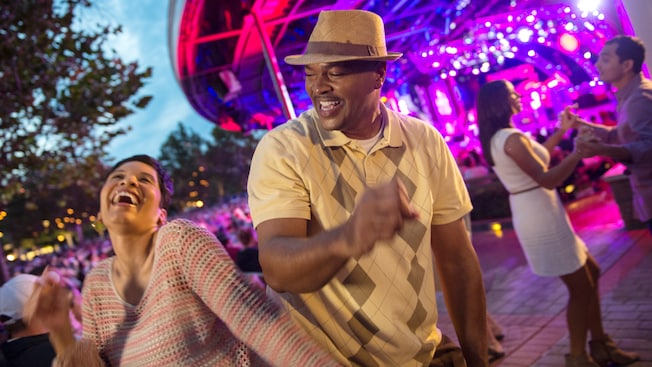 I can not believe this is the 4th time I’m writing about the Garden Rocks Concert Series at EPCOT during the Flower and Garden Festival.  As is now tradition, I share my rankings of my top Garden Rocks concerts at EPCOT.  This year, I will do the same thing but revise my list slightly based on some groups who are making their debut and also in time for you to book a trip to see all the acts this spring.

As I mentioned in those previous articles, as much as I am a fan of all things Disney, I absolutely love music. I take pride in knowing a lot of songs from the time of Elvis up to about 1995ish so I’ll call myself a classic rock fan. Thankfully, for people like me, there is a perfect mixture of Disney and rock music and it is found during the Flower and Garden Festival at EPCOT.

Welcome to Believe Vacation’s Top Ten where today, we’ll look at the Top 10 Garden Rocks Concerts for 2020. For this list, I looked at the entire line-up throughout the festival and have ranked them based on shows I would expect my wife and kids to enjoy and thus, your family as well.  So let’s get rockin and rollin and kick it off with:

Contemporary Jazz Rock music at it’s best (ie, horns and funky rhythms). Famous for three top-5 singles in the late 60s, BS&T brings a fun show with some catchy songs that you may hear on any oldies channel in America.

That Song: Eye of the Tiger

The group who burned the songs of Rocky and its sequels into our memories forever! Anytime Survivor cranked out a hit from the franchise, it soared up the charts.  Unfortunately, like most bands, time has added new members due to the loss of others, in this case, incredible front man Jimi Johnson.  So while you may not get the entire soundtrack, you can be sure you’ll hear Eye of the Tiger and for some families, that’s all you need.

One for the ladies!  In the 80’s, Rick was the quintessential good-looking dude who could play the guitar, sing and have a mega-hit.  While the lesser known songs would see some traction on the charts, the driving notes of THAT SONG forever embedded him into music history.  Great stage presence and a fun show for all ages, especially those (now) middle-aged ladies!

For you young `uns, Don Felder is a former guitarist for the Eagles.  While you will not get the entire group that has been cranking out hit after hit since the 70s, you will definitely HEAR those songs.  To some people, it matters that it is not the originals.  To others, it doesn’t matter.  Adults will love to hear the opening riffs of Take It Easy and Life in the Fast Lane.

That Song: A Whole New World

All I can say, ABOUT DANG TIME!! As a Disney kid in the early 90s, I obviously loved the cartoon-voiced versions of A Whole New World and Beauty and the Beast.  But boy oh boy, this man can belt some iconic Disney songs!!!  Already a star in his former R&B life, his duets with Celine Dion and Regina Belle are some of the greatest songs, not only in Disney history, but music history.  Not sure how this will come across in concert but let’s make it a sure bet there will be moist eyes in the crowd!

That Song: “Working My Way Back to You”

This group is the quintessential Motown group from the 60s and 70s.  The popular quintet will provide the beats, the vocals, the moves, the grooves and the funk while you provide some love back to them. And don’t be surprised if they play some cover songs from other artists of their genre and age that you may know.

Performing at EPCOT for many years now, fans of this group know there was no bigger hit for the band, maybe even the entire 80s, than THAT SONG. First, they were the hippies of Jefferson Airplane, then the psychedelic spin off of Jefferson Starship and now have settled on the pop rock of STARSHIP. Regardless of names of the band or era, the entire family will remember classic songs throughout the entire show.

If you want a concert where you’ll know EVERY SONG that is played, this is the one for you.  Journey has such a catalog of hit song after hit song, all you need is to find a few musicians who look and sound like the originals.  Enter Steve Augerimwho was the Journey front man for many years.  With his strong voice and range, this concert will be one that’ll leave you lovin’, touchin’ and squeezin’ each other!

That Song: I am Henry VIII I Am

The clean-cut British alternative to the shaggy-haired Beatles, Herman’s Hermits had a tremendous amount of success in their native country as well as the United States. In 1965, they had four top 3 hits while appearing on all the major TV shows at the time like The Ed Sullivan Show. For a pop group going strong even after 50 years of performing, Herman’s Hermits and their hits are a show you can not afford to miss.