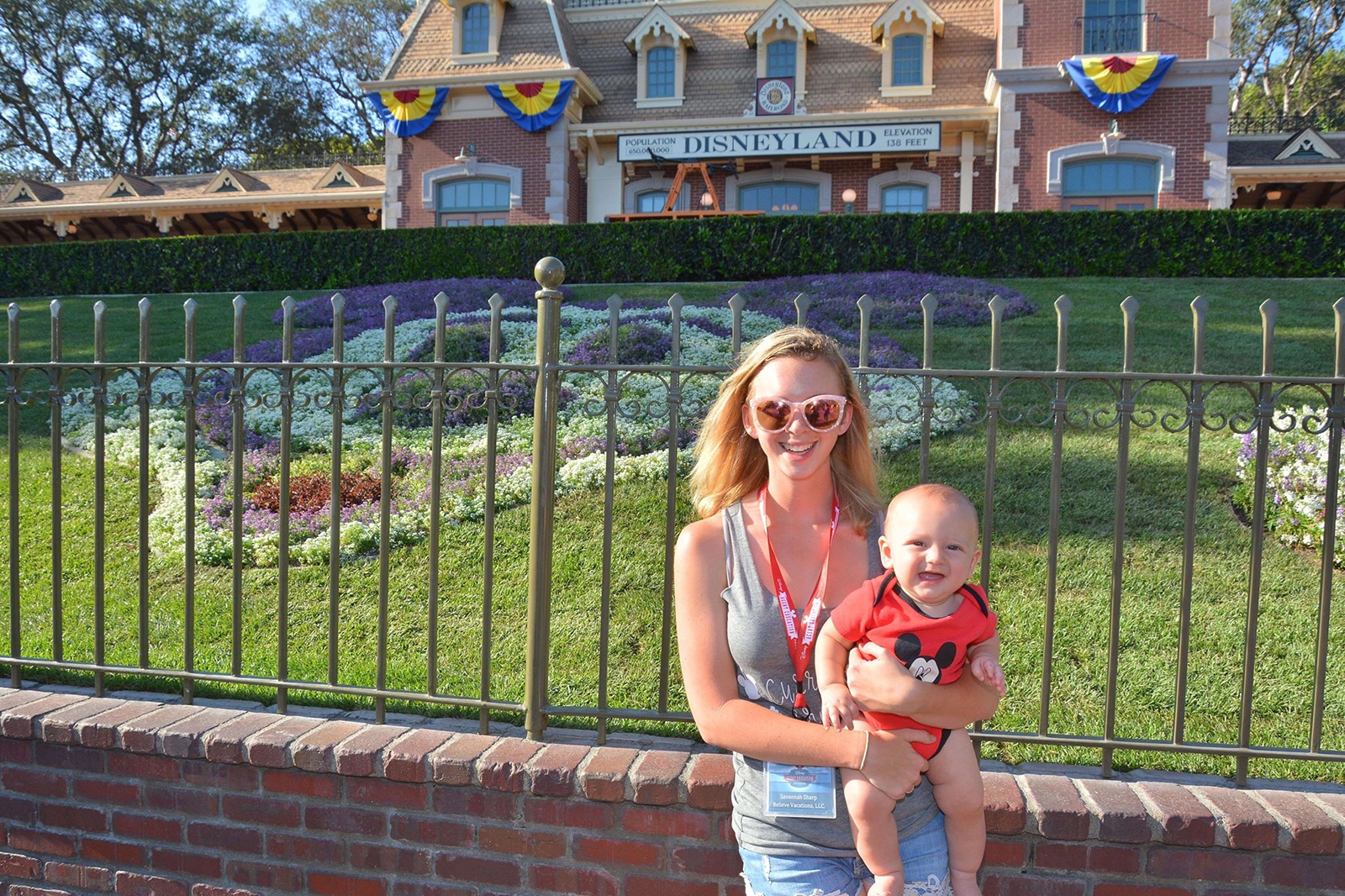 Because of the overall showcase of Walt Disney World, most of our articles tend to focus on our experiences at the Happiest Place on Earth in central Florida. And why not because there is so much to cover. Attractions, Food, Resorts, Transportation, Entertainment and more. But today we are going to head west as we look at the theme park that started it all.

By now, you’re familiar with Savannah Sharp. Savannah is back for another article and is becoming quite the agent as well as a writer. Once again, she used a family vacation to take notes and turn that into an interview article. So welcome to Believe Vacations’ weekly article where today, we’ll visit sunny southern California as Savannah shares with us the basics of Disneyland and may even share some information we never knew. So let’s get started…

Why did you decide to go to DisneyLand? Originally, I went on a travel agent educations trip, but after seeing how much Disneyland had to offer, I brought family with me and scheduled a return trip for this year!

The travel methods at WDW are well-documented. What are the travel methods you used to arrive at Disneyland hotel (plane, shuttle, Uber?) We took a plane to John Wayne Airport which is the closest airport to Disneyland Resort but much much smaller. It’s about a 30 min drive and from there, we utilized the Disneyland Express which is a non-Disney owned bus company that brings guest from the local airports to Anaheim area hotels! After we were in our hotel (the Disneyland Hotel) it was about a 10 min walk to either parks entrance!

Holy Moley! 10 minute walk to the park?! Incredible! What WDW resort does it compare most to? On a level of service, probably any deluxe resort but compared to theme, room decor, and Disney Magic I don’t believe any compare.

Ok, I’ll allow that answer, but I’ll follow it up by asking what amenities does it have?  Every Disneyland hotel has a pool with a water slide and Disneyland Hotel has a monorail themed slide. The hotel specifically has amazing art from the original “it’s a small world” concept art and statues of Minnie and Mickey out front. In the lobby, there is a wall-sized map of the property and tea cup (like the ride) chairs. There’s also a rose garden to enjoy. Characters roam all hotels after breakfast hours! And in the rooms, there are magical headboards in the rooms

Okay, now I want to go! Well there’s more because the rooms are totally immersed into Mickey and Walt himself. There’s stuff all over the hotel about him and about the creation of all the original characters/attractions. It’s the perfect hotel for any Disney lover!null

Okay, the resort is a hit but with only 2 parks, I’m worried we will not get our money’s worth then if we went to the one with 4 in Florida. What immediately stood out to you (for better or worse) that this was different from WDW?  HOW WALKABLE! Incredibly easy for small children. There are so many amazing character experiences. There is no waiting an hour to see Mickey or anyone because they just walk around. The attractions are the rides we know and love but better! Pirates and small world are longer and very different. Disneyland stays true to the dream of being a place for everyone and a totally immersive land. The lack of buses and traveling to and from parks make it so much easier to escape reality and enjoy fantasy.

This gets better and better by the question. Was it easy to navigate around? Between the parks, yes, but you’ll definitely need a map for the parks. There are multiple ways to get almost everywhere so it is easy to get turned around.

Which one of the 2 did you prefer, California Adventure or Disneyland? I preferred Disneyland’s California Adventure for Pixar Pier and the Paint the Night Parade alone. Besides that, they’re very close. DCA is definitely newer age Disney, with Cars and Pixar and Marvel where Disneyland is all the amazing classics we know and love. You really need to do both.

Oh, I’m sure we’ll do both! What did you enjoy most that is only available at those parks and not WDW? Being able to park hop in 10 min to catch a Fastpass at the hotel park! Yep, multi-park scheduling of fast passes!

Ah, our first swing and a miss. Did you do any character meals? Each hotel has their own character meals plus there is a character meal at the Plaza Inn at Disneyland. I personally was able to experience the newly re-imagined Donald’s Seaside Breakfast (Donald, Daisy, Mickey, Minnie, and Stitch) at the PHC Grill at the Paradise Pier Hotel, Goof’s Kitchen (the classics) at the Disneyland Hotel and Storytellers Cafe (Chip and Dale, Mickey Minnie) at the Grand Californian.

Any familiar restaurants from WDW? You’ll see some familiar spots like the Plaza Inn, Trader Sam’s, etc., but I’ve found that a lot of the times the only thing that’s the same is the name! The execution of them are completely different and worth seeing at both parks.

Were there any noticeable differences between DL versions of attractions and WDW versions? For many of the rides that the two parks share, Disneyland has the win. The original rides found at Disneyland (small world, Pirates, Haunted Mansion, all the mountains) are longer, more detailed and even more thrilling for some.

Overall, how were the parades/shows/fireworks?  By far, the most amazing I’ve seen, especially Paint the Night. It’s a masterpiece of nighttime parades and I could watch it again and again. Fantasmic is updated and sporting new technology which brings the show to new levels. The Pixar Play Parade was interactive and so kid-oriented. Parade members threw giant balls with kids and had water gun. The Pixar Fest Together Forever fireworks show lights up the castle and Main Street USA with projections of our favorite Pixar characters and their music we know and love.

Other Things in LA

Did you do other theme parks or attractions? I did not but Iwould love to see LEGO land!

Did you take in traditional LA sights and sounds? Because I was on an agent workshop, I did not. We toured Anaheim and its lovely hotels and spent a lot of time walking the Disneyland resort property.

So it comes down to this. Ultimately, was it worth it? YES! I was a firm WDW believer until now, so I am probably trading in my season pass for a Disneyland passport!

Savannah, you mentioned to me that you thought people would not know about the MaxPass concept so can you educate everyone on what that is? MaxPass is a service offered that allows you to not only schedule your Fastpasses from your phone as soon as your ticket is scanned for the day, but it also gives you PhotoPass. Once your ticket is scanned for the day—either mobile or the printed ticket—your MaxPass activates for the day. After that you can go onto your Fastpass scheduling on the app and make a selection for your first Fastpass. Once that one is used, you can go in and make another one for either park. Unlike WDW, not every ride has Fastpass, only the very popular attractions. Adding MaxPass also allows for free downloads of any picture taken at a PhotoPass locations! It’s $15 a day per ticket so it’s definitely worth the upgrade! Without that option, you have to go get paper Fastpasses like the old WDW system.

Hey now, I loved the old paper Fastpasses but yes, such a small investment to maximize your time.  And speaking of time, we thank you for yours to sit down and share your experience Savannah!

Well, did Savannah convince you to give the Disneyland Resort a try? I know she sold me on the idea. Next time you’re thinking Disney, consider the trip out west to where it all started. It truly is where Disney past meets the future and you may find yourself preferring it! Thanks for reading and remember, there’s a great, big, beautiful tomorrow!