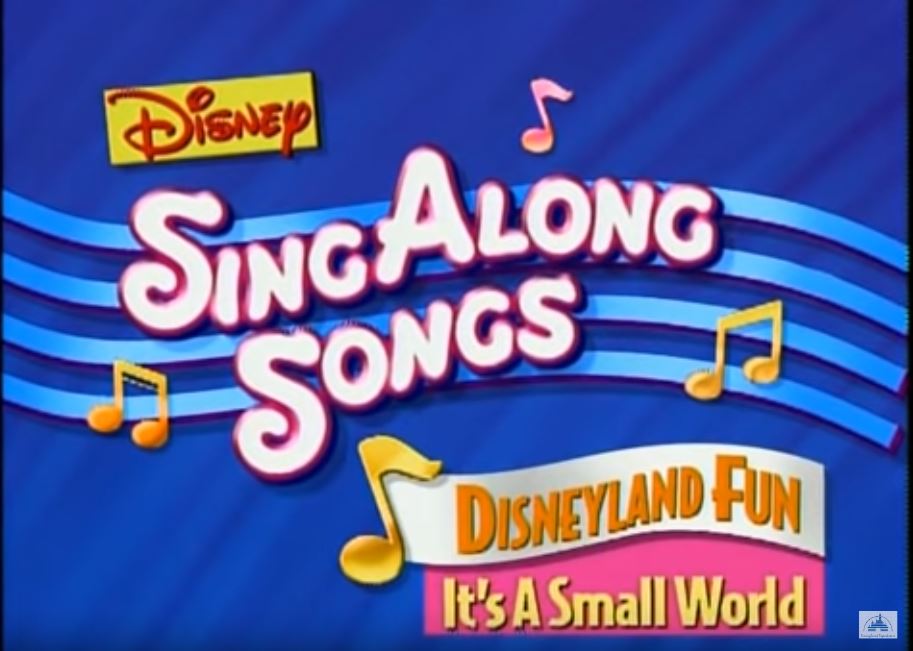 Over the next few weeks, we will return you to our agent-featured articles including topics like cheerleading at Disney, how to do 4 parks in one day, getting married on a Disney Cruise and more. One of those weeks, we’ll get an up-close look at Disneyland in California. Most of our articles deal with Walt Disney World in Florida because there is so much to do and a tremendous amount more regarding options for resorts, dining, entertainment, etc. But before we go to Disneyland, I thought we’d have some fun.

Welcome to Believe Vacations’ First Ever VHS Review. Remember the Disney Sing-A-Long cassettes back in the late 80s and early 90s? If YouTube is good for anything, it is a mecca for nostalgic Disney folks like myself who can go and find these hidden gems that were uploaded once upon a time by truly blessed individuals in this world. Who can forget learning the lyrics to classic songs while following the bouncing ball? A different time, indeed. For today’s article, you can follow along by finding this classic by simply typing in “Disney Sing a Long Disneyland Fun” and thus appears the 30 minute video. So open up the video, grab a loved one or a kiddo and let’s go all the way back to 1990 and enjoy a full days worth of activities through song at Disneyland in beautiful, sunny California!

Oh that amazing intro to the intro song

Mr. Owl with the Students!!! And the dunce in the corner.  Man I’ve missed these guys.  The words are coming back to me.

Whistle While You Work

Not one person!  What time did they have to shoot this for it to be so empty?Also, Goofy looking like he didn’t get enough sleep.

Wow, Roger Rabbit in the middle of the classic guys.  Don’t get me wrong, I love Roger but man, that’s a random character.

Mmmmm, I can smell the popcorn now.

Wow was rope drop slightly different back then.  Like, they ran!!!

Saw a fannypack – definitely shot in the 90s.

Wait, that’s it?  Criminally short for such a great song.

I’m Walkin’ Right Down the Middle of Main Street USA

Not that familiar with this one.

Ah, so this was shot during park hours as people are standing behind the ropes.

Again, the Roger Rabbit focus is amazing.  They had big plans for that guy.

Lull in the action allows me to point out that this edition of the Sing A Long songs does NOT have the bouncing ball and I am NOT okay with that!

They must have heavily edited this song on Main Street because I have yet to see any performers roll their ankles on the track in the middle of the road.

I knew it!  The fact that the next song is focused in Adventureland proves that even Disneyland people “go left” to start their park day!

Oh wait, we get Donald feet over the words for this one.  Maybe there is hope for the ball later.

Yeah right, walking right up to the boat on Jungle Cruise with no wait!

Now there are no words on the screen as they go to Tom Sawyer Island.  How can I SING ALONG?!

Unless this one has John Candy and Dan Akroyd, I’m not familiar either.

The bangs and perms are strong with these kids.

Another Roger Rabbit sighting.  If’ you’re keeping score at home, he’s been in as many songs as Mickey!

Roger gets all worried about Big Thunder Mountain then just leaves the kids at the loading dock.  What a jerk.

Okay, the other songs somewhat matched up with the location but why this song and Big Thund….oh now it’s Splash Mountain.  Carry on!

WAIT STOP!! This is a RAP version of Zip-a-Dee-Doo-Dah complete with 90’s graphics in the corners similar to the old Batman action noise graphics?!

Now we’re rushing to Star Tours?!  I guess those were the 3 main thrill rides in the day but still, I question the song choice.

Now we’re just bouncing all over to the iconic attraction vehicles and darnit, everyone is still singing as we’re now on the 16th verse and not stopping!

Rumbly in my Tumbly

Sorry, i’ll always turn juvenile anytime I see the cuddly bear with POOH on his shirt.

Man, in the 10 seconds since our last song and the start of this one, the mood is just dead.  The people in the background of this one are NOT having any of Pooh’s antics.

Ohhhh i get it, this is a meal plan sequence.  Brilliant marketing here.

Nice touch with the hidden mickey within the nachos and making me want a churro.

I’m good with this as they pretty much kept the original version.

WOW remember the evil queen opening the windows of the castle randomly and shutting them?  We need that back now!

WE HAVE A BOUNCING BALL FOLKS!  THIS IS NOT A DRILL!

Are we seriously now promoting the photo services in this song?  I’m telling you folks, brilliant promo video for all the services at Disney.

Too bad they don’t have a 2019 version that can include songs about Magic Bands, Fast Passes and Travel Insurance!

Random old couple smoochin on the Carousel was cute until you realize they probably had to reshoot that scene a few times.

Also, random old couple has shown up at least 4 times now and the dude looks like Gepetto!

NOW WE’RE TALKING!  No women and children will be seated during the duration of this song.

Intro is like the beginning of an Are You Afraid of the Dark? episode.

While we do get a bouncing pumpkin to follow the words, not a fan of this tempo at ALL!

Captain Hook and Big Bad Wolf costumes looked great in the 90s; Old Hag and Malificent not so much.

Still the best song on the film, mostly because there was no crowd and it could be more choreographed then randomly on the streets.

Bouncing ball is back and now we’re plugging the parade.  Seriously, I need to give this video more credit for being the best sales pitch ever.

Man parades back in the day had huge floats, confetti, Macy’s like balloons, streamers, etc.  When did they decide to worry about profit and cut all those expenses out?!

When You Wish Upon a Star

Now is a good time to bring up that Cinderella’s Castle in Florida is 100x better than Sleeping Beauty’s.

Ha.  Kids running to the characters for good bye hugs and the boy in the black sweater couldn’t find anyone!

Double Ha!  He found Goofy and Donald and Goofy was playing Rock, Paper, Scissors by himself while the kid and Donald did some high five combo awesome enough to make said kid fist pump.  Also, said kid looked like Jason Hervey.

Kid in Goofy hat gives Snow White a smooch.  Kid is now 45 year old man who pulls up this VHS every once in a while, sees his big moment and goes “Great times!”

I always found it disturbing when Minnie and Mickey kiss.  Will someone tilt their head one way or another?  You’re just rubbing noses guys!

Ah yes, the fireworks at Disney.  Never gets old, not even on a 30 year old VHS!

Man, those Sherman Brothers wrote some of the greatest songs of all-time!

Man, what a trip down memory lane. In 30 years, Disney has come so far with it’s technology and guest experiences that it’s somewhat comical to think what we just watched was the industry-leader back then. I still can’t get over how this was basically a well-put-together infomercial that touched on items like dining, photography, entertainment, parades and more. And wow, did they have plans for Roger Rabbit or what?

What did you see in this video that made you remember your earliest trips to Disney? Thanks for watching and remember there’s a great, big, beautiful tomorrow!